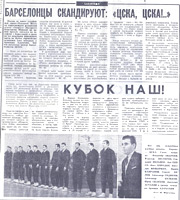 Many European basketball fans recall that Barcelona hosted the 1998 and 2003 Final Fours, but few know that one of the best games ever witnessed in Europe was the 1969 European Cup final in the same city. That game was played at the old Palacio de los Deportes, not far from the Palau Sant Jordi, site of this season’s Turkish Airlines Euroleague Final Four. In the run-up to the continent's 54th title game and the fourth in beautiful Barcelona, on May 8, there is no better time to look back at the first one played in the city, a classic that has stood the test of time. CSKA Moscow and Real Madrid – two giants of the sport, then as now – dueled in a thriller that featured five of the players and coaches later honored among the 50 greatest legends of the first half-century of European club basketball. Back in 1969, in the primes of their careers, theirs was a long-distance rivalry that defined the growth of basketball across Europe. And on that night, they were the protagonists of what became the longest continental trophy game ever played.

The 1968-69 European Cup started with preliminary rounds followed by two quarterfinal group stages. Only the best two teams in each group would reach the semifinals. Madrid and CSKA survived in Group A over Zadar and Akademik Sofia, while Spartak Brno and Standard Liege made it to the two-leg semis from Group B. Madrid swept its series against Liege, while CSKA downed Spartak 101-66 in the first leg and didn't have trouble reaching the final. CSKA had a very powerful team that featured giant center Vladimir Andreev, veteran forward Gennadiy Volnov, scoring guard Sergey Belov and key players such as Jaak Lipso and Vadim Kapranov, with Armenak Alachachan as head coach. Madrid, coached by the legendary Pedro Ferrandiz, had stars like Emiliano Rodriguez, Wayne Brabender, Clifford Luyk, Miles Aiken and Vicente Ramos. The two teams had combined to win six of the previous eight European Cup titles. So on May 24, 1969, a full house of 9,000 fans arrived looking forward to a tremendous showdown. In the end it was more than they had bargained for. It was a game for the ages.

In that era, basketball teams did not feature deep player rotations, but CSKA bucked the trend the habit with a deep, defensive team. Its main man in the middle was Andreev. "To tell you the truth, I especially enjoyed playing defense," Andreev told Euroleague.net recently. "A lot of players back then - like Gennady Volnov, Sergey Belov and Modestas Paulauskas on our national team - could score a lot on any given night, but not everybody played defense. Sometimes, Volnov would shout 'let him go under Vova (Vladimir)' and when the opponent thought he had beaten his man, I would be waiting for him to block the shot, direct to ball to my teammates and run the fast break. We had great team defense." His performances at both ends, however, would be critical in this game.

1968-69 CSKA Moscow roster (Photo: CSKABasket.com)Despite Luyk's efforts, Andreev dominated the paint early and got some help from Lipso and Belov to give CSKA an 8-18 edge after seven minutes. Madrid improved its defense, stopped CSKA's transition game, and found its usual go-to guy in Emiliano, who helped Madrid tie the game at 27-27 midway through the first half. Andreev remained unstoppable in the paint, soon putting Luyk in foul trouble and, along with Kapranov, making sure CSKA kept a slim margin for most of the first half. Two late fast break baskets by Aiken and Brabender, however, pushed Madrid ahead 45-42 at halftime. Despite the sentinel Andreev changing shots and intimidating with his size and long arms, Luyk, Aiken and Brabender shined early in the second half as Madrid took a 64-58 edge. It didn't last long though as Belov and Kapranov stepped up to regain a 66-67 lead for CSKA. Madrid kept running its offense through Brabender and got a lead that seemed definitive, 80-75, with just two minutes left. Luyk fouled out and Emiliano split free throws, allowing Andreev to get CSKA within 81-79. Cristobal Rodriguez missed inside , Andreev got the rebound and fed Lipso for an easy shot that sent the game to overtime at 81-81.

Already facing the first extra period without Luyk, Madrid soon saw Emiliano commit his fifth foul, too. Even so, Brabender and Aiken were able to give the Spanish powerhouse a 93-89 edge. Once again Lipso rescued CSKA with a critical basket and free throws to tie the game again, 93-93. Aiken had a chance to win it, but was intimidated by Andreev and missed an easy shot. According to urban legend, Ferrandiz never forgave Aiken, who never played for the Whites against after that night. Andreev remembers that critical moment: "Aiken went in for a dunk during the last seconds of the first overtime. I can say that nobody dunked on me throughout my career, ever. I had 4 fouls at the moment, so Coach Alachachan and all my teammates were shouting, 'Volodya, don't foul him!' I jumped high with my back to the basket and made a volleyball-like block. If Aiken had released the ball, the referees would have counted it, as my block would have been goaltending. He decided to go for the dunk attempt through my hands and jammed my wrists to the rim, but he could not score. We regained possession and it was a key moment."

Right after that, Lipso sailed to the basket with what seemed to be a go-ahead fast break dunk with 6 seconds to go, but just when the entire CSKA team was celebrating, they learned that a very controversial travelling violation had been called and the game was instead headed for a second overtime. CSKA, led by Coach Alachachan, was about to walk away from the game in protest of that call. Most of the fans in Barcelona were rooting for CSKA, not only because of the classic Madrid-Barcelona sports rivalry, but also because they thought CSKA had deserved to win with Lipso's basket. "I can't say that the audience in Barcelona was supporting us from the very beginning. It just happened this way," Andreev recalls. "The game was very interesting, the refereeing was - I'd say - not in our favor. Therefore the people in the stands cheered for us a bit louder after that moment."

Without Luyk and Emiliano on the floor, Brabender and Aiken were exhausted and CSKA's deeper rotation made the difference in the second extra period. An outstanding Andreev led a 0-6 run that allowed CSKA to go in front for good, 93-99. Aiken and Toncho Nava managed to get Madrid within 97-99 with two minutes left, but free throws by Lipso and Yurij Selishov and an easy basket by Belov sealed the outcome and allowed CSKA to win its fourth European Cup title. Brabender, Aiken, Andreev and Belov all played 50 minutes, which is rather unthinkable these days.

Spanish sports newspaper Mundo Deportivo dedicated its front cover to the 1969 European Cup final, in which CSKA Moscow downed Real Madrid 103-99 in double overtime. Vladimir Andreev paced the winners with 37 points. (Photo: Mundo Deportivo, Spain)Andreev finished the game with 37 points and 11 rebounds. Eyewitnesses say he could have easily had more than 10 blocks, which were not recorded in the stats those days: he famously had 3 on one play! Belov added 19 points, Kapranov scored 18 and Volnov 12 for CSKA. Aiken led Madrid with 24 points. Brabender and Luyk each added 20 and Emiliano had 18. Alachachan became the first person to win the title as both player and coach, something that only Lolo Sainz and Svetislav Pesic have done since. Madrid would not return to the final again until 1974, when it downed with a new generation of players that featured Walter Szczerbiak, Juan Antonio Corbalan and Rafa Rullan alongside Luyk and Brabender.

"This win is a matter of satisfaction to us, especially since it was so hard to reach. We were fully convinced that we were the best team out there, but it was very hard to prove," Alachachan said after the game. "We won because of our eight-man rotation - I used the right players at the right moments. I kept Belov, Andreev and Kapranov on court, but managed to use five players for the other two spots. Madrid has a very effective starting five, but this small difference had a big impact on the game."

"Small mistakes in the most critical moment cost us the game," Ferrandiz said. "When you play at this level, for the European Cup title, and when it goes down to small details, anything can happen. CSKA is the foundation of the Soviet Union national team and that says it all. It is a tough team on defense and has extraordinary skills on offense. It was an extraordinary game and we are proud to have been part of it. Honestly, I didn't expect to lose when we were up by 5 points with two minutes left in regulation."

"The fans were great and CSKA was even better," Aiken said. "We lost the game when it looked like we had won already. CSKA is the best team I have seen in Europe."

Said Luyk: "The fans were great, they supported us during the game and had a, let's say, logical reaction in the final minutes."

No other top continental final before or since has gone to overtime. The game had the complete package - drama, talented players, a little bit of controversy and two outstanding teams fighting for 50 minutes. "We saw a game that will go down in history as one of the best in our sport. CSKA gave us a basketball lesson. There is no need to highlight individuals in this basketball machine that is CSKA. I am totally satisfied with the game we witnessed," European Cup founder and FIBA International Organizations Commission president Raimundo Saporta said after the game.

"It was one of the most thrilling games even seen on a Spanish court," Juan Antonio Samaranch, back then the Sports National Delegate and future President of the International Olympic Committee added. "Madrid lost, but basketball won at the Palacio de los Deportes."

The game's hero was Andreev, of course, who remembers this game as arguably the greatest moment in his career. "The game was fantastic, very spectacular," he said recently. "I did not have a lot of games like this in my career. Madrid played at the highest level, but we did everything right even though we did not have a perfect team. We were a transition team between two generations, we did not have Alzhan Zharmukhamedov yet and Lipso was far from being in good physical condition. Madrid played well, but we answered in the same way. The game had a good number of beautiful plays at both ends. Moreover, the game went to double overtime!"

Indeed, the first top continental final played in Barcelona more than 40 years ago was a major success. Expect the 2011 Turkish Airlines Euroleague Final Four to be a big basketball party - and if we are luck to witness a title game similar to this one, it will go down as another Barcelona instant classic. 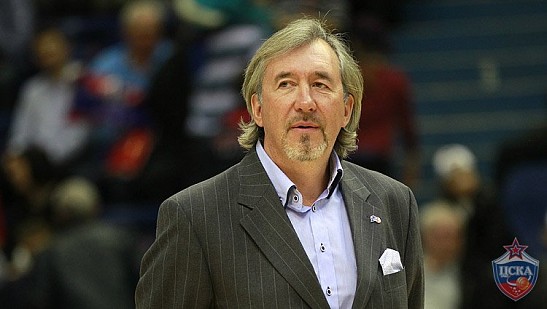 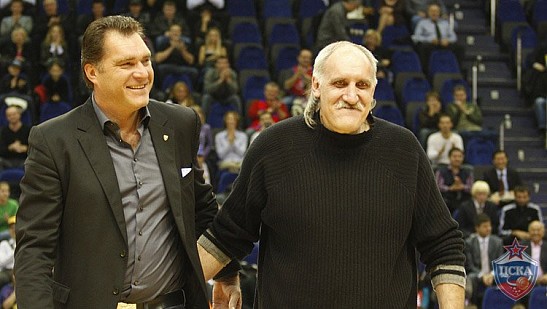 Veterans
Tkachenko and Sabonis: on the floor again!
The friendly game of Soviet basketball legends will take place in Zalgirio Arena on the day of Zalgiris - CSKA game in the VTB United League...

Veterans
CSKA veterans address the team
Honored CSKA players, Olympic, world, European, USSR champions, sent the letter to the club with the words of support to the team which lives through tough times... 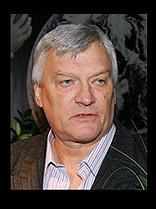 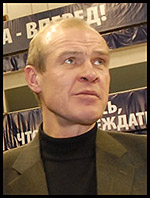 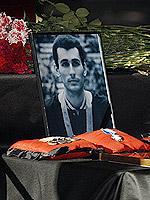