Pogranichnik
The match is over
Moscow
Pog
63
Russian Cup
116

CSKA U19
CSKA junior team defeated Pogranichnik Stavropol in two games in the 1/64 of the Cup of Russia and moved to the next round. 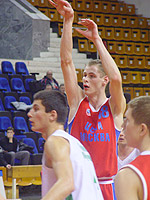 CSKA junior team defeated Pogranichnik Stavropol in two games in the 1/64 of the Cup of Russia and moved to the next round:

According to an agreement between two clubs they played the second game in the USH CSKA. Our team won the first game with a big difference and the final result was a mostly known already. This time CSKA became the leader in the beginning of the game. To the 3rd minute they were leading by 7 points (9-2). But this moment the playmaker of Pogranichnik Alexander Rudenko began to play very good. In the first quarter this forward scored 12 points. But other players of the Stavropol team couldn’t help him because of CSKA good defense.

Our team didn’t have such problems. The playmakers of CSKA assisted well. To the big rest Fomin and Peresypkin added 23 points. After the second quarter our team was leading 56-37.

The second half of the game was the time of the guards of the Army team. They made 12 steals. Geogriy Tsintsadze helped CSKA with 5 steals, 8 goal assists and 7 points. The best sniper of this part of the game was Vasily Zavoruev who scored 20 points. First 2 points of Moldavian player of CSKA Konstantin Motsniy were meeting with many applauds. After his goal our team was leading by 50 points: 113-63.