68
SCA
Scavolini
CSKA won its second game in a row in the TOP 16, second Euroleague game in a row with 20+ difference and 39th game this season. Scavolini was beaten 88-68. Marcus Brown scored 20 points, Dimos Dikoudis added 18 and Theodoras Papaloukas - 11. David Andersen goes on with his double doule serie. 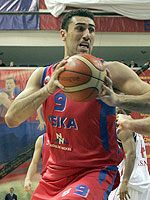 CSKA won its second game in a row in the TOP 16, second Euroleague game in a row with 20+ difference and 39th game this season. Scavolini was beaten 88-68.

The real struggle in the game happened only in the first quarter. With 7.26 to go in the first half J.R.Holden hited 3-pointer and make the difference between the teams 11 points – 32-21. Scavolini did not manage to get closer to CSKA than this 11 points for all 27 minutes left by the time.

- Probably it was our best home game this season. I think that we deserve this victory. We played good in defense. I am satisfied with the work of our guards who could stop Smith. He was best sniper in the first round but today he scored only 10 points. Several days before the game Monya and Andersen get flu. Our doctors made big job, and today Andersen could participate in the game. Monya has injured his ankle and could not play.

- CSKA is a great team with the very good roster. Every player can play very good in defense. Dusan Ivkovic made great job here in Moscow. We played good in the first and third quarters and not good in others. It was very good success to reach TOP16. Now we must try to win our games and concentrate on each of them.