61
CIB
NTV-Plus Sport - LIVE
Cibona
Another brilliant game by CSKA with the exception of one short interval allowed our team to take the sole lead in Euroleague Top 16 Group H and to overcome bad luck of two past home games... 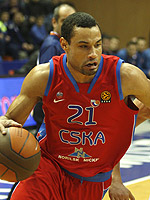 Another brilliant game by CSKA with the exception of one short interval allowed our team to take the sole lead in Euroleague Top 16 Group H and to overcome bad luck of two past home games.

“We played good team game. Everyone who went onto the court contributed. You know that Cibona won against Montepaschi and the team has some good big men and dangerous point guard. So we had all the respect to our opponent. We played well defensively but what is more important we moved the ball well on the other side of the court. The team improved a lot in ball movement and I think now we are close to our best in this.”

“We came here knowing that it is difficult to win in Moscow. And if you think like this you cannot hope to defeat one of the biggest favorites to win the Euroleague. I am disappointed with the team’s attitude in the fourth quarter. When you are making the run and you find yourself down by 7, you should play more aggressive, more confident. But we stopped playing. From the other side CSKA played good defense, scored easy baskets and got the deserved win. I do not consider this loss too serious – who can win against CSKA here? Yes, the point difference was big and if you look at our game in 2nd and 3rd quarters you cannot say that it was deserved. But if you look at the fourth quarter… We played bad defense, too lazy, with almost no help. CSKA big men were faster than ours and it created a lot of open shots for the hosts.”

Still good to be home