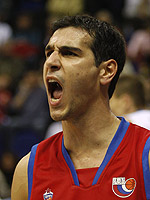 “We are a short team – because of the technical and other reasons we were left with only four Russian players. So I am happy that the team played with heart, desire and showed good basketball especially in the fourth and part of second quarter. Nikos Zisis played two different halves but you should ask him why. We talked in the intermission shortly. I think in the first half he was too aggressive in defense, he tried to press Pargo allowing him to drive under the basket. At the same time he was not so aggressive in offense. In the second half he was able to find the balance in his game. I expect the better game from Morris – I am sure he can play better. I also very satisfied with the game of Savrasenko and Khryapa”.

Better by one quarter