AX Olimpia Milan
The starting game for CSKA in Euroleague ended with the rout of Armani Jeans Milan (90-64) which almost did not show any resistance to our team. 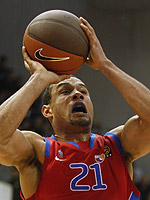 The starting game for CSKA in Euroleague ended with the rout of Armani Jeans Milan (90-64) which almost did not show any resistance to our team.

“Actually the game was more difficult than the result can say. We had all the respect to Armani Jeans team and I am happy we managed to play together, to show very good level of togetherness, both on defense and on offence. Milan played much better in the second half and I expect very strong challenge from them when we will travel to their arena in December”.

“The first game in Euroleague was very difficult for us. It is not easy to play against such a big team like CSKA especially on its court. Now our main goal is to recover some of our players, and first of all to recover their confidence. Yes, we are an athletic team, but the athleticism is not enough to win the games. You have to play basketball, you have to put the ball into the basket. And if you misses some open shots, it becomes very difficult to get the confidence back”.

CSKA torn down the Jeans