CSKA U19
The match is over
Moscow 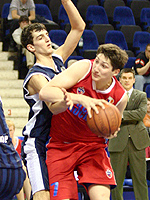 Today the final round of Junior Basketball League was over by the game between junior teams of CSKA and Ural-Great. Yesterday it was clearly knows that Army team became champions. Perm team did not pretend for medals. But both teams fighting well.

The score was open only on the third minute of the game. CSKA took leadership in the early beginning and did not let Ural-Great to catch up them. In the first half of the game Perm team did not let CSKA to run away. The best sniper this minutes was Alexey Kotishevskiy who scored the most part of throws to the army team basket. Only after the arriving Eugeny Kolesnikov and active game of Nikita Kurbanov in the second half CSKA has shown its class. The final advantage of our time is 19 points: 82-61. After the end of the game the official ceremony of celebrating took place by the undead hit We are the champions.