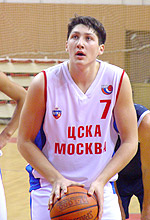 Very fem people could undertake the result of the game for the first minutes. Due two good throws of Alexey Mironov Konti became the leader: 5-0. But Eugeny Pashutin didn’t ask for time-out. He substituted Shabalkin to Kourbanov, it added power for our team under the baskets. After his rebound CSKA scored first points: 5-2.

Konti stayed a leader till the fourth minute of the game. Then Vasily Zavoruev scored5 points in a row and Saint-Petersburg team transferred to catching up category. After it CSKA stayed a leader till the finish of the game. Advantage of our team in a three-second area was incredible – 70 rebounds against 32. Konti tried to changed course of the game with the far throws, but it doesn’t help them. They scored only 17% of this throws. It moved to the triple difference in a score to the final buzzer.

Tomorrow our team will play against Dynamo Moscow Region who today lost the game against Arsenal Tula: 52-71.