Khimki
The match is over
Khimki

CSKA
For the second time in a row CSKA played a game against a team without a loss in the Superleague. Last week UNIKS could not survive under CSKA defense pressure, this time is was Khimky that came from a win against Dynamo to test themselves. 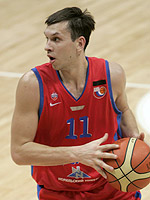 For the second time in a row CSKA played a game against a team without a loss in the Superleague. Last week UNIKS could not survive under CSKA defense pressure, this time is was Khimky that came from a win against Dynamo to test themselves.

It was the first game of CSKA on the court of the newly built Khimki sports hall. The team started to try it out with middle distance shots in the offence by Langdon and Andersen and the defense that was trying not to let Khimki to get into the paint. CSKA received some advantage as Khimki did not defend in a right way in two possessions in a row. At first they let Panov to make an assist to Vanterpool who was alone under the basket and then in the next possession the rival was not in time to stop Langdon hitting a 3 pointer. The head coach of the team Sergey Elevich was forced to take a time out – 15-8 with 3 and a half minutes to go in the period. But CSKA was not stop yet. The team made another 5-2 run and got the 11 points advantage. Only with Pozzecco who entered the court and made Khimki run and some good movement from Wolkowysky the hosts managed to come back into the game by the end of the period – 22-17 in CSKA favor.

The first minutes of the second period were full of turnovers and steals that was not a surprise as the teams played a very fast basketball. But it did not effect the score much both teams scored 15 points in five minutes – 29-25. Khimki were the first team that has to slow down a bit. The reason were Pozzecco left the court and CSKA defense started to work in a right way. By the half time CSKA was once again just one point shy of double digits advantage – 38-29.

In the start of the 3rd period CSKA lost the control on the game for a while. The reason were the referee decisions. In the first half they watched all the contacts between the players carefully but after the break decided to be more liberal. It took the Army club about 3 minutes to get used to the new way of playing. Khimky used this time to cut down CSKA lead to 5 points but with 6.07 to go in the period it was re-set. As the time went on the rhythm of the play stabilized, and the game started to depend more on the defense and team offence. But surprisingly the kind of situation was not much comfortable for CSKA at first as the team had some troubles in the offence. Khimki got as close as 58-55 and Ettore Messina took a time out with 1.58 to go in the quarter. Third long distance shot of Jon-Robert Holden in this period and Alexey Savrasenko two points made CSKA more self assure by the end of the period – 63-57.

In the last quarter CSKA held Khimky on the limit of 6 points for 7 first minutes of the period. The team showed a great balance between the offense and the defense and there was no question about the winner in the end.

The win marked CSKA come back on the top of the Superleague. Only Khimki and the Army club have 1 loss now as UNIKS lost to Dynamo from St.Petersburg.

CSKA is back on the first place of the Superleague