Dynamo
The match is over
Chehov
Dyn
74
Russian Superleague
91

CSKA
CSKA was in the mood for the game with Dynamo Moscow region. The team came to Chekhov a day before the match and did not have to experience one and a half hour transfer from Moscow. 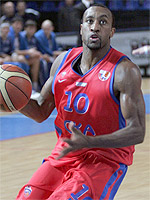 CSKA was in the mood for the game with Dynamo Moscow region. The team came to Chekhov a day before the match and did not have to experience one and a half hour transfer from Moscow.

In the first quarter CSKA players did their best on the court. They tried to put maximum effort and were concentrated in defense, they were fast and smart in offense. And though the difference between the rivals was 10 points (29-19), it seemed like CSKA put a real pressure on Dynamo shoulders.

But the team from Moscow region did not give up. Everyone remembers that CSKA started the game against Montepaschi in a similar way and everyone remembers the final result. In the second quarter Dynamo improved defensively and slowed down CSKA a bit – the team scored only two points in the first 4 minutes of the period. But the Army club did not either loose control on the game or concentration. It took CSKA just one timeout and the impressive performance of Sergey Panov to finish the half in their own favor 46-38.

Veteran forward Sergey Panov was not the only one who contributed greatly to CSKA game. The team finally received the great help from the players that participated in the European championship. Zakhar Pashutin, J.R.Holden and Alexey Savrasenko showed that they are about to team up with the other players and it seems it would not take us long to stop talking about 2 or 3 different groups of players on the roster with the different levels of the readiness. With the help of these players CSKA was ahead of the rival after the 3rd quarter 70-58 and in the start of the last quarter improved the gap to 20 points – 82-62. Dynamo just did not let the rival to finish with the kind of difference – 74-91.