CSKA
102
Russian Superleague
84
Ura
Ural Great
CSKA played the first home game in the season. The pipes ban made the opening ceremony and the game itself look more academically. The audience even reacted on the good possessions of the rival. 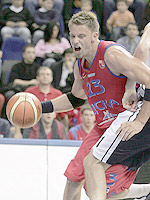 CSKA played the first home game in the season. The pipes ban made the opening ceremony and the game itself look more academically. The audience even reacted on the good possessions of the rival.

The starting five of CSKA did not experience any changes. Once again Holden, Langdon, Pashutin, Shabalkin and Andersen started the game. In the first quarter the game was almost even. Both teams tried to get used one to another. And the only CSKA achievement in the point difference came in the end of the quarter. Vasily Zavoruev’s 3-pointer froze it over on the 29-23 mark.

The second quarter was marked with David Vanterpool debut in CSKA. Although the forward made several mistakes those can be explained by the lack of playing time his presence made CSKA offence to look more interesting and attractive. In the defense Vanterpool also did not make a mess. The problem was that the defense itself did not look well enough before the half time break. Both teams scored points with a very high percentage. Only the great number of traveling did not let Ural Great to finish the first half with the even score. CSKA was ahead – 50-46. And David Andersen can be satisfied with his personal performance – 16 points in 20 minutes.

Once again the teams scored a lot in the second half – 15 points in the starting 3 minutes, but this time CSKA limited the rival on the other end and made a 10-5 run. It made Ural Great players nervous and they started to play the game their coach did not want them to play – selfish. CSKA used the advantage that the rival gave the team - 68-53 with 4.20 to go. When the club from Perm finally pull themselves together it was too late. CSKA built the gap that was very hard to cut down – 20 points. Psychologically it his very hard not to loose concentration loosing by 20 points but Ural Great did the best not to let CSKA break them as a team. The difference 102-84 shows it pretty well.

The game was also marked with the first two points of the center Anatoly Kashirov in CSKA main team.