CSKA
88
Russian Playoffs
94
Dyn
Dynamo
CSKA lost the first game of the final series to Dynamo Moscow 88-94. The loss became the first one in Russian championship this season. 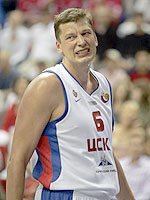 CSKA lost the first game of the final series to Dynamo Moscow 88-94. The loss became the first one in Russian championship this season.

The last minute was the key 60 seconds of the game. The rivals started it with the score 83-83. But then hard luck came for CSKA. At first Trajan Langdon score 3 points, then Alexey Savrasenko missed both free throws and Marcus Brown fouled Andrey Fetisov – 83-88. Then came long distance shot of J.R.Holden with 29 seconds to go, but the next time CSKA hit the basket it was too late. Fetisov, Lavrinovich and Langdon scored free throws – 88-94. The best scorer of CSKA was J.R.Holden with 21 point.

We did not play for 8 days and we took 10 minutes to fing our game rhythme. After losing ferst quarter we could recover in the second thanks good defence and many transition points. In the second half we lose concentration and let Dynamo to score 57 points. We could not stop players of the opponent on the perimetr: Greer, Langdon and Domani scored 60 points. We lose the first set of play-off and now we have 24 hours to prepare to tomorrow game and show the diffirent face of CSKA.

The first game of the series is always very important. I am glad that we could win it but it is only beginning. We played good first quarter and not so good the second. After the big rest both teams were taking the leadership. I am glad that we have shown team character. In the key moments we scored all free throws. Now we have very few time to recover. I hopes that tomorrow Likholitov can play and help us.