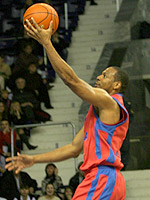 In the fifth round of the regular championship in Russian Superleague CSKA defeat Lokomotiv Rostov with 39-points advantage. The fact that the army team could not score 100 points was the only dissapoint for tribunes.

I think that my players played very good today, especially in the offense. We made 27 assists - so, we scored 27 easy points. Today six players scored more then 10 points. We played very good in the first and in the third quarters, letting Lokomotiv score only 15 and 9 points. In the second and fourth quarters our defense was down. But in the end we let to play uor young players.

I respect very much the team of Rostov. Thay won the game in Perm and fighted till the final buzzer in Kazan. But now we need more controlling game with serious opponents. Tomorow we continue our practices to prepare to next Euroleague game.

Today uur young players had an opportunity to receive needed playing time. CSKA has shown again that there very good players in their roster. I am satisfied with some moments of the game. We could win the last quarter. But now CSKA is stronger and faster.