EVRAS
The match is over
Yekaterinburg
EVR
68
Russian Superleague
99

CSKA
CSKA has started the regular championship of Superleague by defeating in Yekaterinburg local EURAS: 99-68. Antonio Granger has become the best sniper of the game. He scored 22 points including 17 of it in the first quarter. 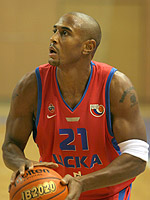 CSKA has started the regular championship of Superleague by defeating in Yekaterinburg local EURAS: 99-68. Antonio Granger has become the best sniper of the game. He scored 22 points including 17 of it in the first quarter.

Greece forward Dimos Dikoudis was out of the technical roster for the game because of the rules of Russian championship. Starting five with Holden, Brown, Granger, Muursepp and Savrasenko could run away in the early beginning. To the end of the 4th minute they could get double advantage: 6-12. With 9-17 on the score table Sergey Zozulin had to ask the time-out. After it zone defense of hosts and good game of Niksa Tarle helper EURAS to get the army team: 20-20. Dusan Ivkovic changed Martin Muursepp with the second foul to Sergey Panov. After it Holden and Granger together scored 9 points in a row: 20-29.

After the rest Sergey Monya and David Andersen entered to the court. In the first attack Australian center scored 2 points making the advantage of his team double: 20-31. This time zone defense did not help EURAS already. Army players scored 3-pointers with 44%-percentage. In the little interval Sergey Monya and Theodoros Papaloukas scored 3 fouls. Greece guard stayed on the court, and Russian forward was substituted to Zakhar Pashurin. Then Brown and Pashutin continued to score 3-pointers. They scored 9 points in a row. In the last attack of the first half Brown put on score 31-56.

In the beginning of the third quarter Papaloukas received 4th foul and was substituted to rested Holden. In the middle of these 10 minutes Marcus Brown increased the advantage of CSKA to 30 points: 36-66. Getting big advantage Ivkovic gave a rest to all American players puting to the court Papaloukas, Pashutin, Monya, Muursepp and Savrasenko. To the minute to the end of the quarter Vassily Zavoruev made his debut in Superleague-2004/05. In 11 minutes he scored 6 points, 1 assist, 1 steal and 3 rebounds.

In the middle of the lasyt quarter the second ex-player of the junior team Nikita Kourbanov entered to the game. This moment it was just a one question - if CSKA score 100 points. Having just about 1 second Vassily Zavoruev made a very far throw, but the ball missed the basket: 68-99.

First of all I want to say that there is the first our game in Russian championship. I would like to wish luck to Yekaterinburg team. I think that we were better today and deserved this win. It was very fast game with many easy points and a big number of assists. I am not satisfied with the balance of 2- and 3-points shots. There must be more 2-points shots in my game philosophy but I am satisfied with the percentage of 3-pointers. EURAS played the most part of the game with the zone defense. But there are many strong and tough opponents and we must not just shot far throws, we also must inside the perimeter. Both clubs has gathered together just a little time before the start of the championship and we are not in our best shape yet. I think that it will be very interesting championship, one of the strongest in Europe this season.

The coach of CSKA Eugeny Pashutin:

We have liked you city very much last summer when we came here to the opening of the training center. Dusan Ivkovic and I, we both equalized its very high level. Basketball in Yekaterinburg has a very good progress now. Your city has a very good hall and now you need to put your team to such level. It needs time. And talking about this game I can only add that we played with very tough defense in the beginning and received too many fouls. Then our coaching staff made some corrects and we played much better in the second quarter.