82
TAU
TAU Ceramica
For the second year in a row, this time with a dramatic last-minute rally, CSKA Moscow is going to the Final Four! After trailing much of the night before a sellout home crowd , CSKA pulled off a miracle to beat visiting Tau Ceramica 84-82 for the ticket to Tel Aviv from Group D! 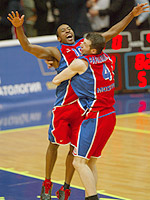 For the second year in a row, this time with a dramatic last-minute rally, CSKA Moscow is going to the Final Four! After trailing much of the night before a sellout home crowd , CSKA pulled off a miracle to beat visiting Tau Ceramica 84-82 for the ticket to Tel Aviv from Group D!

It was a physical game in the early going, with both teams playing strong defense. A layup by Nocioni right after tipoff and a five-meter jumper by Holden were the only baskets in the opening 3 minutes. CSKA dominated the boards, while both teams struggled to score until a dunk by Alexander and mid-range jumper by Brown gave the hosts a 7-5 lead. Tau finally found its touch, and with it raced ahead on the scoreboard. Prigioni drilled a pair of three-pointers to get the visitors going, and then Nocioni added 2 more shots from downtown in a 3-16 run. Sergi Vidal added a left-handed dunk and Kornel David beat the shot clock with a long two-pointer, boosting Tau to a 10-21 lead after 7 minutes. CSKA had already called timeout, and Victor Khryapa stepped up with 6 points in a 8-3 run that got the hosts back to within 18-24. But a basket in the low post by David and a four-meter jumper by Nocioni gave Tau a 19-28 after 10 minutes. Tau, even with star shooter Arvydas Macijauskas on the bench, drilled 5 of 7 threes in the first period.

Tau kept displaying all its offensive talent early in the second quarter. Nocioni’s third triple and a long jumper by Scola helped the guests to keep a safe lead at 24-34. CSKA improved once Dragan Tarlac stepped on court to score a layup. Turkcan, who had started to dominate the boards, followed with 2 baskets and an assist for a reverse layup by Teodoros Papaloukas, enough for an 8-0 CSKA run that suddenly make it a two-point game at 32-34. Tau needed offense again and Nocioni obliged with 2 quick baskets and a big three-pointer to extend Tau’s lead to 37-44 after 18 minutes. Turkcan, once again, fired back with an easy basket but he picked up his third foul soon after that, while Nocioni and Scola combined for 4 foul shots in the final minute to give Tau a 42-48 lead at halftime. Nocioni was up to 22 points after 20 minutes, while Turkcan had 12 and 7 rebounds for CSKA.

CSKA started the second half with just one regular starter on court, Brown, and its second lineup went on a 7-2 opening run in which Sergei Panov had a layup in penetration and Papaloukas added 3 points to bring the hosts within 49-50 after 22 minutes. Tau struggled in the offensive end, while consecutive three-point plays by Aleksander Bashminov and Papaloukas made CSKA regain the lead at 56-54. Tau had to face severe foul trouble, as David returned to the bench with 4 fouls shortly before Scola also picked up his fourth foul, too. The guests looked for Scola and Betts in the middle for points in the paint and regained the lead at 57-60. Both teams exchanged turnovers and missed shots for 2 minutes in a long third quarter. A three-point play by Betts gave Tau a 60-63 lead, but 2 foul shots by Brown and a big three-pointer by Turkcan left CSKA with the upper hand, 65-63, entering the fourth quarter.

CSKA, backed by a sellout crowd, saw Tau sub Tiago Splitter open the final quarter with a basket before Macijauskas came off the bench for 6 points that gave the guests a lead again, 69-71. CSKA re-took the lead at 73-71 with a four-meter jumper by Holden and free throws by Alexander. Nocioni now stepped up in crunch time, scoring 7 points including a huge three-pointer and a fastbreak dunk to give Tau a 76-78 lead with 2 minutes to go. Turkcan missed 2 foul shots, and Macijauskas drilled a six-meter jumper for a four-point Tau lead, 76-80. The carousel of free throws continued as Alexander made one while Macijauskas drilled 2 in the other end for a 77-82 lead with 50 seconds left. After a CSKA turnover, Tau seemed to have the game in its hands. But now Holden stole back the ball, and then he picked an offensive rebound, got fouled and hit the free throw to change the scoreboard and the game with 33.9 seconds left. Ahead only 80-82, but needing a four-point win for its Final Four chances, Tau looked to Nocioni for a three-pointer, but it missed. Brown grabbed the rebound and was fouled, making both free throws with 12.4 seconds remaining to tie 82-82. Overtime beckoned, but Papaloukas changed that notion quick by stealing the ball from Vidal right after the inbound pass and slamming it through the rim to send the Moscow crowd to celebrating an error-free passage by CSKA into the Final Four!

CSKA is going to the Final Four!